Brian Roberts Says He’s Closer Than Ever To Returning 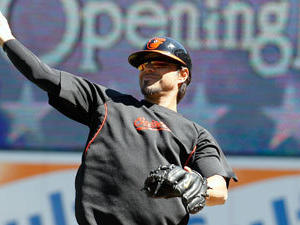 It marked the one-year anniversary of Roberts’ last game, when his headfirst slide at Fenway Park triggered a second wave of concussion symptoms May 16, 2011.

Roberts said Wednesday that he has thought about the date — and about being out of the game for a full year — but that it helps that he feels closer than ever to a return. Roberts, who averaged 152 games a year from 2004 through 2009, has played in just 98 games since the beginning of the 2010 season.

“I thought about it a lot today, actually,” Roberts said before the Orioles’ series opener in Kansas City. “It’s one of those things you try to look back on and see what you’ve learned and what God’s tried to teach you through it. I think it happened for a reason. He’s in control of it, but at the same time, it doesn’t mean it hasn’t been extremely hard and very frustrating at times. But at the same time, I’m very grateful for where I am today.”

Before Wednesday’s game, Roberts was diving for balls from his second base position on the Kauffman Stadium infield. Over the past six days, he has gone from diving while on his knees to running after balls and lunging to field balls hit to his sides.

He says it’s the final “real big hurdle” before he can play in a game.

“It’s a pretty big hurdle, getting on my belly and trying to get back to aggressively getting on the ground,” Roberts said. “It’s a big hurdle physically as well as mentally. I think anybody who goes through an injury, one of the hardest things is repeating the activity that injured you.”

Another hurdle has been traveling with the team, and being on this two-day trip to Kansas City — handling an abrupt schedule of flying in late and being with the team through a quick day-after-night series — was another test Roberts’ doctor wanted him to overcome.

Throughout his recovery, Roberts has repeatedly said he’s focused only on the next day, that recovering from a concussion doesn’t have much of a timetable. But for the first time since last May, Roberts said, he’s actually talking about a potential date to begin a rehabilitation assignment.

“We’re finally close enough where at least the doctor and I and the team can talk about days,” Roberts said. “For a long time, we didn’t even talk about days. We’re finally getting to the point where we can at least bring that into the discussion. We haven’t narrowed anything down, by any means. It still is, as my doctor says, a fluid situation, but we are at least to the point where we could start to look.”

Yes, Roberts has been out of the game for a year — far more than he had hoped — but he can finally see a return on the horizon.

“I’m very thankful that on the one-year day I can look at this in a much more positive light,” Roberts said. “I don’t want this to sound bad in any way, but I wouldn’t trade it because I wouldn’t want to trade anything that’s happened in my life. If I scripted it, it wouldn’t be what I scripted because I obviously would have loved to have been playing baseball the last 162 games, but at the same time, I hope that I’m a different person than I was a year ago.”

Kevin Hickey, the quirky left-handed reliever who pitched parts of three seasons for the Orioles, including the storybook 1989 “Why Not?” season, died Wednesday at Rush University Medical Center in Chicago. He was 56.

A Chicago native who spent three of his six major league seasons with his hometown White Sox, Hickey had been a pre-game instructor/batting practice pitcher with that club since 2004. He was discovered unresponsive in his hotel room before Chicago’s Opening Day game in Texas this April. He had been hospitalized since.

No official cause of death was announced. Hickey wasn’t drafted but was discovered by the White Sox during an open tryout in 1978. He didn’t play baseball in high school but was an amateur softball player and semi-pro baseball player.

He played for the White Sox from 1981 to 1983, then made a comeback at age 32 with the Orioles in 1989. He excelled that year, going 2-3 with a 2.92 ERA in 51 games — and was one of the poster boys for the surprising and exciting Orioles squad that almost went from worst to first.

He pitched two more less-than-stellar years for the Orioles before being released in July 1991, and he didn’t play in the majors again. In six seasons, he was 9-14 with a 3.91 ERA in 231 major league games (107 with the Orioles).

Avery back atop order

Rookie outfielder Xavier Avery was in the starting lineup for the fourth straight day after being called up Sunday, leading off for the third time — each time against a right-handed starter (he hit ninth Tuesday against New York Yankees lefty CC Sabathia).

Orioles bench coach John Russell, who was in charge of the team before the game while manager Buck Showalter wasn’t feeling well, said Avery has added a different dimension in the leadoff spot.

“He’s the type of guy at the top of the lineup, Buck and I have talked about it, who can create some things,” Russell said. “We’ve seen it in the few games he’s played. He can drop a bunt down, beat it out. He covers a lot of ground in the outfield. He’s a threat on the bases. It makes teams uneasy. I know when we’ve faced teams and they have that one speed guy, you have to pay attention to them.

The Orioles came into Wednesday’s series opener against Kansas City having taken six of their past eight series against the Royals. … Baltimore entered Wednesday attempting to win its 12th road game this season in 17 tries. The Orioles didn’t get their 12th road win last year until their 31st away game June 16. … The Orioles were 6-1 against the American League Central going into Wednesday. … Thursday’s starter, left-hander Brian Matusz, was knocked out of his only previous start against the Royals in the fourth inning after allowing five earned runs on two hits and four walks on July 29, 2010.