BALTIMORE — Second baseman Brian Roberts is nearing a rehab assignment, and the veteran infielder, who hasn’t appeared in a Major League game in more than a year, acknowledged Monday that it’s possible he could be back playing for a Minor League affiliate within a week.

“We’ve got a plan in place, and 99 percent of it is based on what Brian and his doctors are talking about,” manager Buck Showalter said. “We’re at the point where there’s a potential date involved.”

Neither Roberts or Showalter would elaborate on when that exact date is, but when pressed further, Roberts said the next seven days is a definite possibility, a prospect which has fueled the slowly-building optimism that the 34-year-old can rejoin the team in the season’s first half. 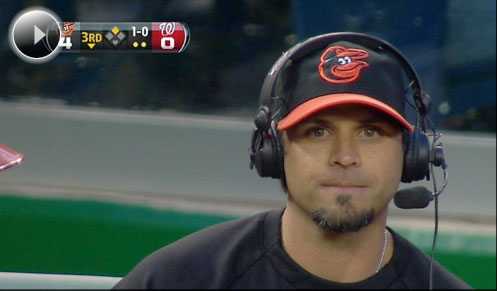 “For a long time, I wasn’t sure where the finish line was, and I certainly didn’t see it,” Roberts said of his long road to recovery from a concussion. “When you do get a glimpse of that, it’s nice and you do get a breath of fresh air and some added momentum.

“There’s been a lot of times in the last year that I had no idea if I’d ever play baseball again, so in some ways it’d be a huge achievement or triumph just to get back out on that field. It’s definitely something that I’ve thought a lot about. I’d love for it to happen. I think when that day happens it will be — not necessarily something I’m proud of, but I guess maybe in some ways I’ve continued to fight. There were a lot of times I could have easily shut it down.”

Roberts said he would go to a full-season club — not to an affiliate in Sarasota — and he would like to commute, which makes nearby Double-A Bowie the most logical landing spot. Even when he gets sent out, Roberts plans on still being around the team when they are in town and doesn’t have a specific timeframe for the length of his rehab, which is a maximum of 20 days under Major League Baseball’s rules.

Showalter, who has allowed himself to think of the possibilities a healthy Roberts would add to his club, bristled at the insinuation that Roberts would be a part-time player when he returns.

“Role player? I don’t think about it like that at all,” Showalter said in reference to Roberts just being active being enough. “I think Brian is looking at it as a lot more than just getting here. Brian wants to get here and bring what Brian can bring, and we all know what that capability is. I think he knows what it takes to perform at this level.

“He’s not going to put himself in a position to come back unless he knows he can bring that. He knows what the needs of a player is to play at the level in our division, so I have complete trust in him that he’ll know if it’s right.”

Roberts said he’s up for whatever Showalter wants upon his return, and praised the performance and effort of Robert Andino, who has earned an everyday role at second base in Roberts’ absence.

“When it comes to winning my job back, whatever Buck wants me to do, I’ll do,” Roberts said. “I’d love for this team to be playing in October, and if I’m sitting on the bench then, I guess, so be it. I’d like to think he’s going to run me out there when I’m ready.

“I think the goal is to get me back here doing everything, and when I get back here, I can do everything. It doesn’t mean I can’t DH every now and then or something, or Buck thinks that’s the best thing for a week straight. We haven’t really talked too much about that option. Certainly our goal is to play second base every day.”