Brian Roberts back on field in Bowie, gives thoughts on Machado 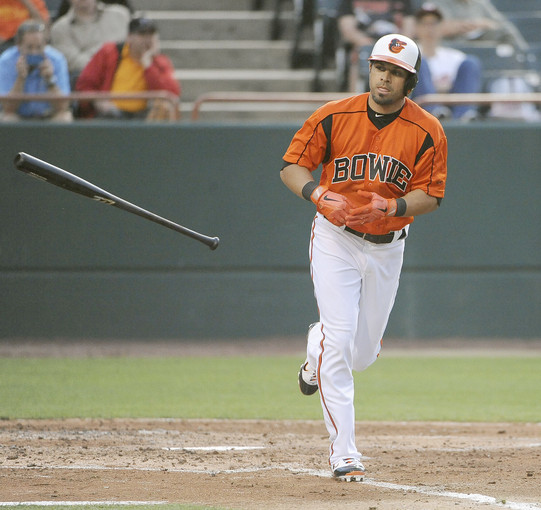 BOWIE— Brian Roberts got several nice ovations from the small crowd at Prince George’s Stadium on Wednesday night as he navigated his first competitive appearance in more than a year.

The plan was to get a couple of at-bats and play a few innings in the field, which is exactly what he did, but he never got a chance to swing the bat in his two plate appearances. Richmond Flying Squirrels pitcher Mike Kickham walked him twice, so he’ll have to wait until at least Thursday night to take his first cuts at the plate.

“When I got in the box, it was very comfortable … more comfortable than I thought it would be,” Roberts said. “I toldBrady [Anderson], it might not have been the worst thing to just see some pitches.”

He did have some action on the bases, scoring from first base on a double (plus an error) by Baysox outfielder Buck Britton. He also made a couple of plays at second, handling a routine bouncer and turning a double play with top infield prospect Manny Machado.

Machado fielded the ball and got it to him so quickly that base runner Ryan Cavan did not have an opportunity to attempt a takeout slide. Roberts said he was very impressed with the Orioles’ likely shortstop of the future.

“Manny made a couple of plays out there tonight that 28 out of 30 major league shortstops don’t make,” he said. “Of course, J.J. [Hardy] would be one of the other two.”