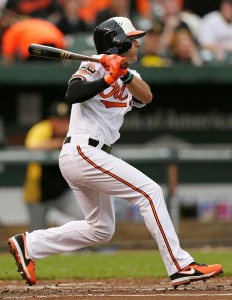 Brian Roberts, the Second Baseman for the Baltimore Orioles, provided an offensive spark in the latest series against the Pirates.  He went 3-for-4 in his first night back from a concussion injury that sidelined him for well over a year.  Reports had surfaced and scattered about his general mood since he was unable to play the sport he loved, and rumors and whispers began filling the blogosphere about whether or not Roberts would return to the game.  Baseball is a game of anticipation, and fans of the Baltimore Orioles could not have anticipated a better first night back from their beloved starter if they had scribbled it into destiny themselves.

Dan Connolly of the Baltimore Sun recorded some of the moments in the interview room that evening.  Roberts mentioned that he did not have the words to truly express how great it felt to get three hits in his first night back with the 2nd place Orioles, but he did give us some insight as to his mental wellbeing regarding his faith:

“I think it definitely makes me realize that I’ve always tried to live for my faith and really trusted God. If I had a plan for my life I wouldn’t have scripted this by any means. I don’t think anybody would script hard times in their life. We try to grow from them, learn from them and we try to use them for good. As much as I would have liked to have played the last 175 games or 190 games that I wasn’t able to, I’m hoping the next 190 will be better than I ever imagined.”

An interesting picture is painted here as Roberts remarks about his ability to trust in God over the years.  Often times we like to take control of every little fiber of our lives, when all along we could be pushing ourselves into a deeper hole, or further away from where God had always intended us to be.  If Roberts had been given a book and he could pen any aspect of his life in the book, he may not have authored himself to receive a concussion.  We don’t want hard times to fall upon us, and rightfully so.  However, without the hard times we would not have the good times.

Are you trying to take control of your life to the point of not allowing God to truly do what he had planned for you to do?