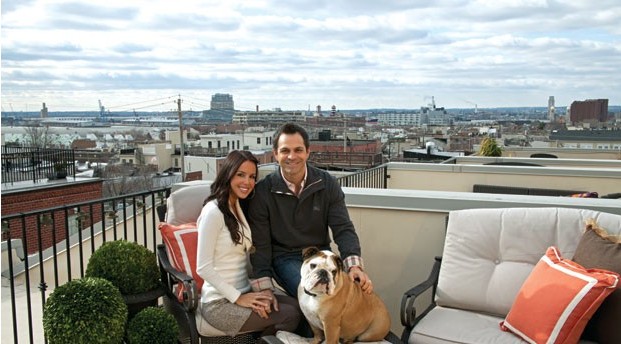 Orioles second baseman Brian Roberts likes to unwind with his wife, model Diana Roberts, and their English bulldog Rocky on their roof deck.

To Orioles’ second baseman Brian Roberts, his wife Diana hit it out of the park with her design of their Canton home

He’s a record-setting baseball player and she’s a model who has graced the pages of Vanity Fair and Sports Illustrated. Yet Brian and Diana Roberts, along with their English bulldog Rocky, live in a modest Canton townhouse for many of the same reasons as their neighbors: A rooftop deck offers breathtaking views of the harbor; they’re within walking distance of many popular restaurants; and the small enclave feels like “a little neighborhood within itself” where, says Brian, everyone has dogs.

This slugger, who’s been playing second base for the Baltimore Orioles since 2001 and holds the franchise record for most doubles in a single season, put down roots in Charm City and purchased his East Baltimore digs in 2005—two years before he met Diana. Since they married in January 2009, however, one would be hard pressed to find remnants from Brian’s bachelor pad days. “There’s not a single article of furniture left from when I lived here alone—I can promise you that!” he laughs. “When Diana came in, it was a gradual process of finding our tastes together—what she liked, what I liked—and transforming it into a home.”

Fortunately, the two gravitate toward a similar style: traditional with a classic feel. “We love the mirrored aspects and pops of glam but we also like casual so that when people come over, they can sit on the couch and put their feet up,” says Diana, who jokes that their place turns into a “hotel” for family and friends once the baseball season starts in April.

Decorating is Diana’s passion, and although she lacks any formal training—except for a summer internship at a Miami design firm while she was in college—she has a keen eye for what she likes and takes the time to find it. More significantly, she designs with her heart. “It’s really important to me to make our house a home,” she says. “I want my husband to come home and feel comfortable.”

Brian could not be happier with the transformation. “For a long time, even though this was my home, it didn’t feel like it,” he says. “Now that Diana’s taken over, I enjoy coming home and that’s because of the time she has taken.”

Knowing that life as a professional baseball player is stressful, Diana selected a calming color palette of soft blues and greens that she incorporated throughout the home, a stark contrast to the red, gold and black hues of Brian’s bachelor pad days. She also chose furnishings with soft lines, including curvy dining room chairs, and hung large mirrors to accentuate the home’s open floor plan. Her close friend Roxy Kruger designed the window treatments while another friend, Baltimore interior designer Sharon Sheets, offered expertise with some finishing touches.

One of Diana’s most recent projects was designing a “man cave” for Brian’s birthday in the fourth-floor sunroom adjacent to the rooftop deck. Everything from framed jerseys to a guitar signed by Kenny Chesney is on display—there’s even the ball from Brian’s first-ever home run at Chapel Hill High School in North Carolina (where his father was the baseball coach at UNC). “For me, these are like photos—snapshots of important moments in my life that I like to remember and that I like to share with others,” Brian explains.

The couple is also in the process of remodeling and furnishing a home they purchased last summer in Sarasota, Florida, where the Orioles train off-season. But Diana is not in a hurry to complete the project. “If I can’t find pieces I’m super excited about, I’d rather have nothing in a room,” she says.

The couple puts a high priority on giving back to the community. Brian, who had open-heart surgery at the age of five, has always recognized the importance of brightening a sick child’s day. In 2003, he began visiting kids at the University of Maryland Children’s Hospital (UMHC), and when he witnessed the positive impact his visits made, he wanted to do even more. “I decided to take what God has given me—the ability and the platform—to also raise money and help the hospital in a tangible way.”

In 2005, he came up with the idea for Brian’s Baseball Bash, a family-friendly event that features games, auctions and the opportunity to mingle with local sports figures. The event sold out in its first year and raised $200,000 for UMHC. Diana has become involved as well, and five years later, they have raised nearly $1 million through the event. The sixth annual Bash will be this summer at Dave and Buster’s in Arundel Mills Mall. And this spring, the couple plans to launch the One for All Fund dedicated to improving the health and well-being of children through patient care, research and education. (See officialbrianroberts.com.)

“We have been blessed with so much and we’re so fortunate to be where we are that we feel like this is just part of our calling,” says Brian. “We’re grateful to the city of Baltimore and how it has supported us. This has become our home and we love it.”

Writer Kelli Rosen is based in Baltimore, Maryland. Anne Gummerson is a photographer in Baltimore.