A Winner at Second by Eric Tiansay

“FCA gives athletes the opportunity to make an impact by allowing them to share the things God has done in their lives. The way FCA goes about spreading the gospel is very effective.’?” – Brian Roberts

Brian Roberts has strange priorities for a professional athlete. In 1999, when he was drafted by the Baltimore Orioles in the first round of the amateur draft, he postponed signing with the major-league team. Why? Because he was invited to be a Huddle Leader at an FCA Camp in Black Mountain, N.C.

“It was something I definitely wanted to do,” Roberts recalled. “I made it a priority to do that before I signed with the Orioles.”

And his sacrifice paid off. Roberts said that the camp had a “huge impact” on him.

“It was the first time I gave my testimony,” he told STV from his off-season home in Phoenix. “To do it in front of a thousand people was an incredible experience.

After I gave my testimony, they gave an altar call and 25 to 30 kids came forward, including two from my Huddle. It was just amazing to me that God could use me when I felt like I didn’t have much to share.”

Roberts, now 26, has been involved with FCA since he was a 6-year-old in Durham, N.C., attending camps and Huddles. But as his role within FCA shifted from student-athlete to professional athlete, his eyes were opened to new lessons.

Since that camp, Roberts has spoken at a dozen FCA gatherings, mostly in North Carolina, and has encouraged thousands of middle, high school and college students to draw closer to God.
Besides speaking at Huddles and conducting a little-league clinic, Roberts also plans to get involved with the Baltimore-area FCA this year and is helping to recruit major leaguers to serve with him during a winter FCA Baseball Camp, which will be held in Greenville, N.C., from December 16-18.

“Brian grew up going to FCA Camp, attending Huddles, serving as a Huddle Leader and actively supporting our work with his time and talents,” David Daly, FCA’s area director for Northwest North Carolina, told STV. “There is no stronger supporter of FCA than Brian.”

Daly should know. He has known Roberts since he was the chaplain for the University of North Carolina baseball team seven years ago, which has proven long enough for the Dalys to consider Roberts “part of the family.” And it has been through this dynamic that Roberts has had a major influence on Daly’s 17-year-old son, John.

The two met when John was a 10-year-old batboy for the Tar Heels. Through the years, they have formed a special friendship rooted in faith. 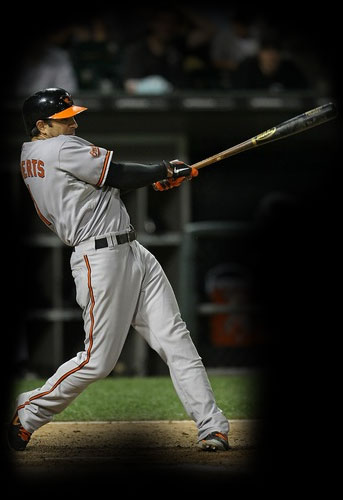 “Brian has always had time for John and has enjoyed seeing him,” said Daly. “John learned from Brian that baseball was a way to share his faith. John puts Bible verses on his baseball cap and always makes a cross outside the batter’s box with his bat in the dirt before every at bat. That is Brian’s influence.

“One of John’s most prized possessions is a game-worn Brian Roberts jersey that is autographed with the words: ‘To John, the little brother I never had. May God richly bless you. Proverbs 3:5-6.’”

“Brian has always looked out for me,” said John, who, like Roberts, plays second base. “He makes a point to call me and check up on how my life is going. When I was going through a rough time once, Brian took time while he was in Oakland getting ready for a game. He talked to me and helped me realize that I could get through it with God’s help. I am extremely thankful that he treats me like a little brother. He is such an important part of my life.”

Roberts generally talks to John once a month on the phone and is quick to point out that his influence on the teen is reciprocal.

“Any impact I’ve had on John has stemmed from the impact his dad has had on my life,” said Roberts, who considers David Daly his mentor, “and I know in one way, shape or form, I am John’s mentor. It’s true that he’s like the little brother I never had, and it’s been fun to watch him grow and mature.

“But I admire him more than he admires me,” added Roberts, who grew up in a Christian home but didn’t surrender his life to Christ until his freshman year of college. “I admire that he has lived out his faith ever since I’ve known him. I’ve never seen him ashamed of his faith or not doing what is right. As he gets older, he is becoming bolder and bolder in his faith. That’s encouraging to me and makes me be bolder for Christ.”

Being bold for Christ is a characteristic that those around Roberts have come to respect.

“Brian has always wanted to use baseball not for his glory, but for the glory of God and to reach out with His love to others,” Daly said. “I have seen Brian sign countless autographs after games, and he always has a smile and a kind word for those who seek him out.

“I have been with him when he has stopped his car on the way out of the players parking lot at [Baltimore’s] Camden Yards and signed for several minutes,” Daly added. “He loves kids much the same way as our Lord, and he recognizes his responsibility as a role model to live like Jesus and share His love. He is indeed a humble servant. He’s one of the best role models I’ve ever seen¾not only for his baseball skills, but more importantly in the way he lives his Christian life. He’s one of the finest young men I’ve ever met.”